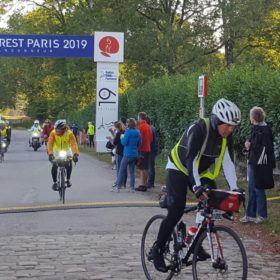 June 26 2001 remember walking down at the port in Anzio with Mimma when I began not being able to walk straight. We went home things became worse lost use of my left arm and ability to speak. After visiting the doctor finally got the diagnosis multiple sclerosis. In March of 2002 thanks to my mother started trying to ride a bike. After my first year of riding me felt cycling was something that I could do and it really made me feel good mentally and physically. So I was reading cycling books and discovered the now famous Paris Brest Paris. To qualify for the Paris Brest Paris you must complete 4 qualifying rides a 200km, 300km, 400km and a 600km in the time max time allowed. I contacted the president of the Paris Brest Paris and ask him where in Italy are the qualifying rides? “He said “Tony up near Torino in northern Italy.” Which is a good 8-9 hour drive from my house so during the spring I went to Torino 4 times alone to do my qualifying rides and off to Paris I went to complete my first of 4 Paris Brest Paris. In 2004 I thought it would be a good idea to try to organize these rides here in Nettuno, so I contacted Fermo Rigamonti then the Paris Brest Paris representative in Italy. So from 2004 I started organizing these rides starting with the 200 and 300km in 2004 to arriving at the whole series of rides up until last year. Tomorrow here in Nettuno another team will be organizing these rides, it will be the first time that I have not taken part in organizing the opening ride in 13 years. It was time to move on, Fermo and I founded today’s federation in Italy that now holds 150 rides during the year compared to 4 in 2003. I was very proud to be a part of what we did but comes a time we have to know when it is time to move on and be happy what you have and what you have accomplished. All the best to Cicli Paco and the riders that will be riding tomorrow March 5,2017. #ridetohonortheunknown