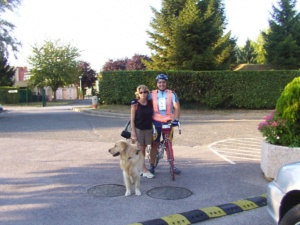 Day one and two August 18 and 19 – This is the start of the race my start time is 10:30 pm; I woke up as usual around 8 and took Scott for a walk. Mimma and her cousin are heading to the Luv today in Paris and I am going to stay in the hotel to get ready for the race with Scott. Now one thing I must say about France you can take a dog anywhere so Scott saw everything there is to see in Paris. The Japanese, Koreans and French must have taking 100 pictures of him. At 8:00pm Mimma, Stefano and Scott took me over to the staging area at Saint Quentin I felt right away there was something big in the air getting ready to happen. I said goodbye to everyone because all of the riders had to go into an area to get your time card run through the computer. I ran into some Italian friends of mine that I met during the qualifying races Piero, Piera and Maurizio. We decided to try and stay together that whole race if we could. They really didn’t have a plan so I suggested that we go at least the first 24 hours without stopping to sleep down to Loudeac which is at the 450km . They all agreed so this was are plan. The staging area was set up in a soccer field where the judges set us off in groups of 600 riders. When it came time for our group to move up to the start area it was 10:45 pm. To my surprise there were literally thousands of people along the streets cheering us on. The judge on the loud speaker counted down in French 5, 4, 3 ,2 ,1 and we were off. To tell you the truth I was really moved about what was going on around me, I thought back 2 years before I couldn’t walk and here I was doing the second hardest bike race in the world second only to the Coast to Coast in America. My sense when we were leaving Paris with all of the cheering people was not that of a race but as if I was going somewhere to do something for them, what I didn’t know yet. The first 140km we rolled into Mortagne au perche which was area to eat and drink. Every area had a cafeteria with meat, fish, chicken, pasta, vegetables, bread and just about everything you need, A full meal was about $7.00. The key to surviving this ride was making sure you ate and drank enough. I believed that the distance was so great the I had to eat real food not power bars or other things. We had a meal and moved on. What really shocked me that there was no flat areas along the course it was up and down mountains the whole way and believe me it was hard as hell. Other than my bike I had a pack on the back of my bike that weighted about 20lbs. I ran into a man from Finland who was on his 6th Paris Brest Paris race and he said that the course would get worst as we go toward Brest. I thought to myself what did I get myself into. Piera, Piero, Maurizio and I moved on toward Loudeac I was hoping to get in by 10:00pm Tuesday night the 19th of August so to get some sleep. Well Maurizio got sick and we had to stop so he could go to the bathroom. We got into Loudeac at midnight, Piero and Piera who are husband and wife had to go to the red cross to get medical assistance, I think it was because they didn’t eat and drink enough. We got together and I said we have to meet in the morning at 4 to eat breakfast and be off to Brest. I wanted to go to Brest and back to Loudeac and then get some sleep. Well after eating, washing up and changing my shorts I decided to get some sleep. To tell you the truth I felt pretty good. Now at the control areas they have sleeping areas with cots. There is a big room with 200 cots you get a number and tell the judge what time you want awake and they will call you. I opted to sleep outside I thought it would be quieter. I wrapped my self up in my space blanket on the grass and slept from 2 until 4. The temperature at night was about 48 degrees but the blanket worked great plus I was so tired you can feel anything anyway.

August 20
I met up with my friends we ate and we took off at 5 for Brest and back for a 326 km ride . I wanted to get back around 12 midnight to do the same routine eat and sleep. Brest was the half waypoint and getting back to Loudeac would bring to total up to 777km with 525km to go. Plus it is a mental factor knowing that you are on the way back to Paris. The interesting part of the race was from Paris and back all along the course in the country villages all hours of the day there were people cheering us on. Many homes had coffee, water and food out on their front yard for us. Each home had an old bicycle decorated with roses. I was still trying to figure out why these people are out here all hours of the day waiting for us. Along the road I was starting to see other riders who were in serious trouble. They would be wobbling on their bikes or just sleeping on the side of the road. Since leaving on Monday night and it is Wednesday afternoon I have had 2 hours of sleep. Some people made the mistake of trying to go to Brest without sleeping which is too risky. I was convinced even if I slept two hours a night I had to sleep. Maurizio and the others were laughing at me because I always had to sandwiches in my biking shirt but I was not going to stop because I ran out of energy. I saw that Piera and Piero were really slowing down so I told them I am going to go on by myself they said ok. Maurizio said he was going to stay with them for a while and try to catch up with me later at Brest. This was the most beautiful part of the course with the mountains but it was also the hardest. Coming over the last mountain you could see Brest on the Atlantic Ocean what a site and it really pumped me up. I thought I am almost half way there. Upon arriving in Brest there is a steep climb up into the city and here again people yelling and screaming. I rolled into the control station and got something to eat. I rested for an hour and right before leaving Maurizio came in without Piero and Piera. I waited for Maurzio to eat and we took off for the 162km ride back to Loudeac. It would take about 8 hours to get back in and we will have to ride about 5 in the dark. At this part of the race every part of your body is starting to ache and you want to lie down and go to sleep. Maurizo and I rode at our pace we were really tired. We have covered 777 km and since leaving on Monday I have slept only two hours. At bout 1 am we came upon a small village we were both exhausted and cold the temperature here was about 38 degrees. Along the road we saw some light in front of a house and there was a family giving out coffee, tea, cookies, water and fruit. We drank about 4 cups a coffee each to warm up and ate some cookies. We had to get back to Loudeac by 6 am to make the time check. We got in at 3:am , 3 hours later than I wanted to but when you go without sleep you have to really concentrate on what you are doing. It was really hard to come of a mountain in the dark at going about 30mph your tired and the light on your bike is not as powerful as a car so it is scary. I was starting to feel the fatigue. We ate something really quick got washed and sleep for 2 hours. I got up at 5 I felt and looked terrible I guess you could say everyone did. Maurizio and I were getting ready to leave and Piera and Piero came in at 5:50 10 minutes before the cut off and they looked terrible. They decided to continue with us.