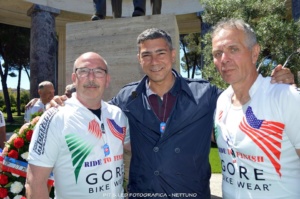 A few days have passed since Team Ride To Finish completed their quest to bring awareness for the 480 unknown soldiers buried in the American Cemetery in Nettuno Italy. I had a great deal of respect for these men before we left Tony’s grandfather’s hometown of Solarino, Sicily and rode 1000 Km (miles) to Nettuno, Italy in just 72 hours. But now, I have so much more respect for them after seeing what those numbers mean. The 6 riders and 1 crew chief ages average about 58 years old, It is nice to here stories about taking on long rides like Paris-Brest-Paris along with how many miles they rode, how little food they eat and how sleep is only a few hours each day. But know I know first hand what these non-professional riders give of themselves to reach their goals! These men rode 13 miles almost non-stop until 2:00 AM until they were completely exhausted. They were so tired that we pulled over at a gas station where they laid down on the cold asphalt and slept for 2 hours in 38 degree weather. They slept 2 hours, woke up, filled their water bottles, and continued there journey until 2:00 PM the next afternoon. I saw the amount of grit it takes to ride for 1 and 1/2 hours to climb a mountain in Calabria that was a constant incline for 23 Km that never seemed to end. I saw the jubilation in their eyes and their smiles to be able to eat 3 or 4 prosciutto sandwiches .to fill their empty tanks with fuel. as quickly as possible so they can continue their journey! 3 hours of sleep and then back to packing up their gear and rushing to get everything done so that they would not be the last person ready, so that the whole team could push on. There was a carpenter, a dentist, a Doctor, an electronic engineer, a karate instructor, a food buyer and an ex-baseball player with MS. These are not the cyclist you see in the Tour de France, but a group of everyday ordinary men with the same passion for the sport and DESIRE to Ride To Finish! All of this effort and sacrifice to honor 480 men who gave there lives during World War II and were unable to be identified. There wish is to be able to raise enough money to place a Christmas wreath on each of their graves on December 24th, 2017. I am honored to call these men my friends and I am sure we will be for the rest of our lives! I feel a great deal pride that I was able to help in a small way by assisting as the 2nd crew member. I tend to preach about “Never Give Up” but now I have witnessed the true spirit of NON MOLLARE!