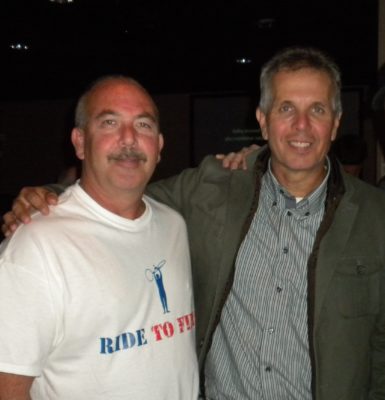 The Penn Hills High School Class of 1977 wants to remind Penn Hills students to never give up.

Two alumni teamed up to sell T-shirts to support a $500 scholarship for the next several years through the Penn Hills Parent Teacher Association’s scholarship funds.

Together Dougherty and Lonero designed and sold T-shirts, golf hats and draw-string backpacks with the phrase “Non mollare” — Italian for “Never give up” — to sell to raise money for scholarships for Penn Hills students.

The phrase is especially poignant for Lonero, who continued an athletic career despite a diagnosis of multiple sclerosis.

After graduating from Penn Hills, Lonero attended Louisiana State University on a baseball scholarship and went on to play professional baseball in Italy, where he still lives.

He said he was diagnosed with multiple sclerosis in 2001. He began distance cycling as he was recovering.

Despite his physical challenges, Lonero has completed Paris Brest Paris, an 80-mile race from Paris to Normandy, four times. He was the subject of an award-winning documentary called “Ride to Finish,” which told his story.

Dougherty, who still lives in the area, came up with the idea to design and sell the merchandise, which has an Italian flag, an American flag and a figure holding a bike in the air in addition to the phrase “Non mollare.”

The two decided to donate the proceeds back to the community where they grew up.

Dougherty said they began selling the shirts, bags and hats to friends and family but soon got interest from a wider audience.

They’ve raised enough to give a $500 donation to the PTA scholarship fund at Penn Hills — which awards $500 scholarships to about 30 to 45 students each spring — for the 2015-2016 school year and already are working toward a $500 donation for next year.

Students write essays each year as part of their scholarship applications.

Dougherty and Lonero said they hope to help select the student who receives the scholarship.

“We hope the scholarship goes to a student who has shown in some way … that he has not given up,” Dougherty said.

We use cookies on our website to give you the most relevant experience by remembering your preferences and repeat visits. By clicking “Accept All”, you consent to the use of ALL the cookies. However, you may visit "Cookie Settings" to provide a controlled consent.
Cookie SettingsAccept All
Manage consent