As you know cycling has been a part of my life for the last 20 years and recently I have been riding to promote our veterans who have died and served here in Italy. The other day my mother asked me what type of event or ride I was planning on doing this year. I didn’t really know at the time but soon after as I was online and a photo showed up and I clicked on it. The picture was of Gino Bartali , not knowing  who Gino is would be like an American not knowing Joe Dimaggio.   12 years ago I became friends with his son Andrea who unfortunately passed away in 2017. We never spoke about his father when we were together. I really regret that.

Gino Bartali was born on July 18, 1914, in Ponte a Ema, a small village south of Florence, Italy. Bartali became a professional racer in 1935. He won his first Giro d’Italia the next year, in 1936. The Italian Cycling Federation then compelled him to compete in the Tour de France in order to increase Italy’s cycling reputation abroad. Italian Fascist leader Benito Mussolini had risen to power in 1922 and had taken control of public and private institutions. Italian Fascists hoped that a victory in the Tour de France would demonstrate the superiority of the Fascism and the “Italian race.”

Bartali did, in fact, win the Tour de France in 1938. However, Bartali had no sympathies for the regime. He dedicated the win to Madonna, our Holy Mother and Jesus.  He never dedicated his win to Italian Fascist leader Benito Mussolini, as tradition dictated. Consequently, he received no honors upon his return to Italy.

1938 also brought a dramatic change for Italian Jews as the Fascist Grand Council approved anti-Jewish measures based on Germany’s Nuremberg Laws. These laws excluded Jews from most aspects of Italian life and would facilitate future deportations. They also marked the tightening of the alliance with Hitler’s Germany.

The summer of 1943 was a pivotal moment for Italy. Mussolini was overthrown in July. In September, the new government signed an armistice with the Allies. Germany invaded the northern regions of the country, including Tuscany. With the German occupation, conditions for the Jewish population grew much worse.

Also in September 1943, Italian Cardinal Elia Dalla Costa asked to meet Bartali. Dalla Costa had been secretly aiding thousands of Jews seeking refuge from other European countries. The fugitives needed falsified identity cards. Dalla Costa shared his plan with Bartali. Under the cover of his long training rides, Bartali could carry counterfeit documents and photos in the hollow frame of his bike. The plan was a nearly perfect one as Bartali knew those roads well and his need to train provided an ideal alibi.

Despite the risks, Bartali accepted. For the following year, he rode while hiding the vital materials in the frame of his bicycle. Sometimes Bartali was accompanied by his training companions, who were unaware of his activities. When stopped at checkpoints, Bartali engaged the guards in conversation about cycling. He asked guards not to touch his bicycle, telling them that all the parts were adjusted in a special way to suit his racing style.

By coincidence, shortly after he started his underground activity, Bartali was asked to hide a Jewish family whom he knew well. Giorgio Goldenberg, his wife, and their son hid in Bartali’s cellar until Florence was liberated.

As the war progressed and cycling races were canceled, Bartali’s cover began to appear less credible. In July 1944, Bartali was interrogated at Villa Triste (Sorrow House) in Florence, where local Fascist officials imprisoned and tortured their prisoners. Fortunately, one of Bartali’s interrogators happened to be his one-time army commander, who convinced the other interrogators that Bartali was innocent of any charges.

For many years after the war, Bartali did not speak about his role in saving hundreds of people, sharing just a few details with his son Andrea. It was only after his death that Bartali’s rescue activities came to light. In 2013, Yad Vashem recognized Gino Bartali with the honor of Righteous Among the Nations. The award is are non-Jewish individuals who have been honored by Yad Vashem, Israel’s Holocaust memorial, for risking their lives to aid Jews during the Holocaust. It is estimated Gino saved 1000 jewish people’s lives. Not only did he receive this award the catholic church started the process of Beatification for Gino after he could become a saint for the church. 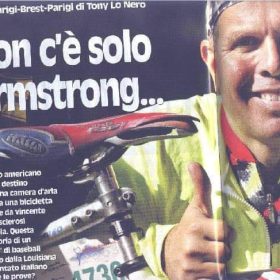 I made some phone calls and I wanted to find out who was alive from Gino’s immediate family. His son Andrea had two daughters. I was able to get the phone number of one of them, Gioia Bartali and I called her. I told her my story and I offered to bring her an American Flag to her for what her grandfather did during the war. She was so overwhelmed that we would do this. I emphasized the fact I don’t need any notoriety just want to bring her a flag on my bike. She said that it is not right , today the world needs to know that there are people like me and her grandfather. I thought that was a bad comparison. She demanded  that I bring the flag directly to Museo della Memoria , is a museum located in Assisi Italy dedicated to the holocaust , Assisi is the home  of Saint Francis.

In the museum there is a room dedicated to Gino Bartali. Gioia said the flag should be there with her father’s things.  Great honor our flag will be in this museum honoring a great man who, when he died, said he wanted to be buried in a suit without pockets because he didn’t need to bring anything with him from this world.

The video of the museum