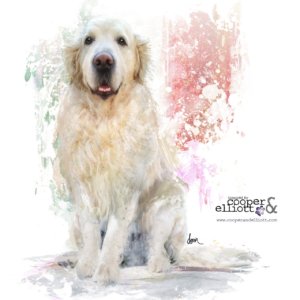 Meet Junior who lives in Nettuno, Italy, as an Inspired by Cooper & Elliott custom pet painting. Junior is very chill. He enjoys going on a 5 mile walk every morning with his Dad. In the winter, he loves to lay by the fireplace and in the hot summer in Southern Italy, he loves to find a cool area on the marble floor or roll around in the thick, cool green grass of his backyard. While he is not very vocal, when he speaks, he makes himself known with one of the deepest bass tones you will ever hear. Junior is a very loyal and protective of his human parents, and the feeling is reciprocated. Junior’s Dad has an amazing story, which Junior is a part of. His Dad, Tony, was a professional baseball player in Italy and was a member of the Italian National Baseball Team that competed in the 1984 Olympics in Los Angeles. In 2001, Tony found out he had Multiple Sclerosis. Junior’s Uncle (Scotty) was pivotal in Tony’s rehab from this debilitating disease, and now Junior has taken Scotty’s place in keeping Tony active. Guess what? Tony is now an accomplished long-distance Cyclist, known around the world in Cycling circles! A documentary was made about Tony’s battle with MS and how he is beating the disease every day. The documentary is called “Ride To Finish” (I’ll post a link in the comments in case anyone would like to see it)…what an inspiration, what a team! If that wasn’t amazing enough, Tony and his best friend Paul (from the U.S.A.) set up a scholarship fund for their high school alma mater (Penn Hills, Pittsburgh PA). It’s called the Class of 77 NON MOLLARE Scholarship! NON MOLLARE means to Never Give Up in Italian. Paul Dougherty and wife Lynda Flajnik Dougherty (in the U.S.A.) commissioned this piece as a special housewarming gift for Junior’s folks. They wanted me to somehow incorporate a nod to Italy in the portrait, so the colors in the background reflect the Italian flag. I was so honored to create this piece of such a special dog and amazing human. The piece made it into their hands the other day, and I am told they called Paul in the middle of the night very excited about it! So happy we could be a part of this special gift and make several people (and hopefully a canine) happy too!
Ride to Finish